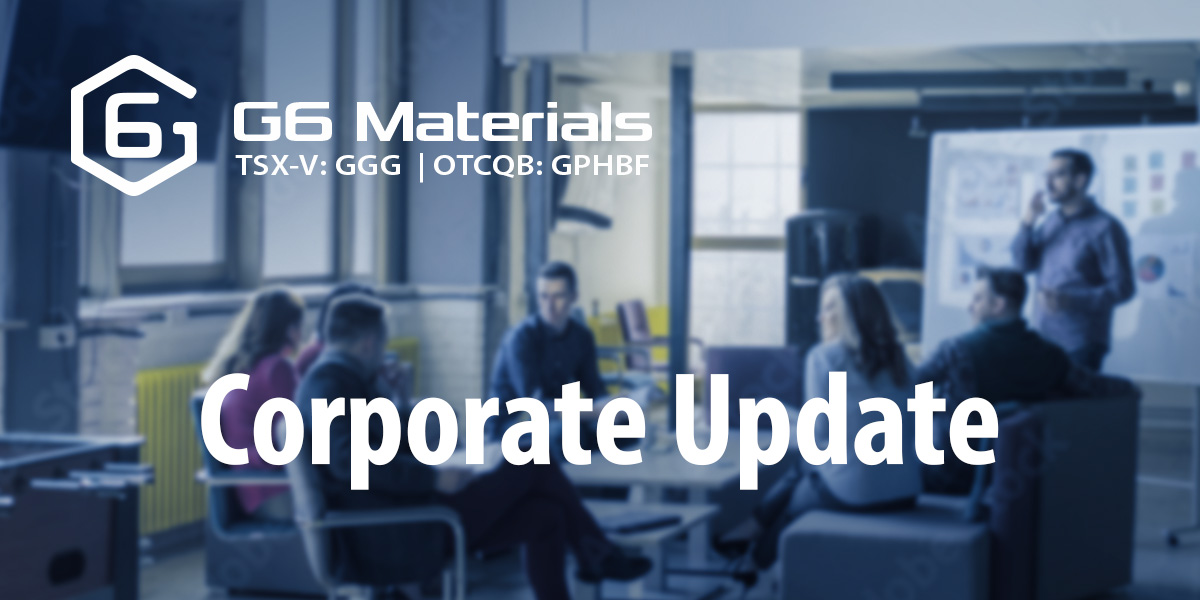 Ronkonkoma, New York, USA - TheNewswire – September 29, 2022 - G6 Materials Corp. (“G6” or the “Company”) (TSXV: GGG, OTCQB: GPHBF), announces that as a result of delays in the completion of its audit, the Company will be unable to file its financial statements and accompanying management’s discussion and analysis for the financial year ended May 31, 2021 (collectively, the “Annual Filings”) by September 28, 2022, being the date that such filings are due under applicable Canadian securities law requirements.

In response to the Annual Filings delay, the Company has applied for and been granted a management cease trade order (“MCTO”) under National Policy 12-203 – Management Cease Trade Orders ("NP 12-203").

The Annual Filings are delayed as a result of a requirement to change auditors in late July. The successor auditor was engaged as soon as practicable, however the amount of time was not sufficient to complete the audit process within the compressed timeframe. Additional audit procedures were also required as a result of the transition to a new auditor.

During the MCTO, the general investing public will continue to be able to trade in the Company's common shares listed on the TSX Venture Exchange. However, the Company's Chief Executive Officer and Chief Financial Officer will not be able to trade in the Company's shares, nor will the Company be able to, directly or indirectly, issue securities to or acquire securities from an insider or employee of the Company except in accordance with legally binding obligations to do so existing as of September 29, 2022. The Company is not currently subject to any insolvency proceedings. If the Company provides any information to any of its creditors during the period in which it is in default of filing the Annual Filings, the Company confirms that it will also file material change reports on SEDAR containing such information.

G6 Materials Corp. is a high-tech company with expertise in advanced materials that creates value developing innovative composites for a wide range of industrial uses. Graphene Laboratories Inc., a wholly owned subsidiary of G6, sells a range of graphene-based products and other materials, including but not limited to conductive epoxies, high-performance composites, and R&D materials, with numerous customers from among the Fortune 500 list of companies, as well as NASA and leading universities. Graphene Laboratories Inc. has entered the global air filtration market with Breathe+®, a line of medical grade HEPA air filtration products enhanced with advanced performance graphene material.

G6 has identified new graphene-based applications to accelerate growth into the future. Accordingly, the Company has a valuable IP portfolio currently comprising five granted patents. The Company’s management team and employees have a deep understanding of graphene technology based on decades of aggregate academic and commercial experience. Graphene Laboratories Inc., a wholly owned subsidiary of G6 located in Ronkonkoma, New York, has established its premium research laboratory and scalable production facility is equipped with advanced analytical and material processing equipment.

The Company’s e-commerce websites are listed below:

Factors that could cause actual results to differ materially from those described in such forward-looking information include, but are not limited to, the Company may not complete its audit and file the Annual Filings as currently anticipated, or at all; and other related risks as more fully set out in the registration statement of the Company and other documents disclosed under the Company's filings at www.sedar.com.